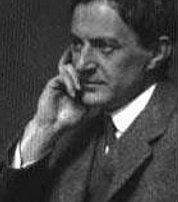 'Oh, no man knows
Through what wild centuries
Roves back the rose.'
All That's Past

Anerley for many years. He is Penge's best-kept secret. An international literary

figure, his poem 'The Listeners' was published while he lived in Thornsett Road in 1912.
Only a  few years ago 'The Listeners', with its famous opening lines 'Is there anybody there?' said the Traveller, Knocking on the moonlit door,' was judged Britain's best-loved poem.  Many of us learned it at school and have never forgotten it.

'Silence. Still faint on the porch
Brake the flames of the stars.'

It is interesting to consider that these evocative lines from The Ghost, much praised by the critic F.R.Leavis, may have been written standing in the porch at Thornsett Road or maybe in Worbeck Road, looking up at the panoramic night sky in Anerley, panoramic because we look from the side of a hill. Walter de la Mare, 'Jack' to his friends, lived first with his young family in Mackenzie Road, then in a flat in Samos Road, then in houses in Worbeck Road and Thornsett Road from 1899 to 1925.

Friend to Thomas Hardy, Siegfried Sassoon, Robert Frost, T.S. Eliot, Virginia Woolf, Rupert Brooke and Joyce Grenfell among others, De la Mare turned down a knighthood in 1924 and again in 1931 but accepted many honorary university degrees from 1924 onwards. In 1948 he was made a Companion of Honour and in 1953 was awarded the Order of Merit, one of the very few people apart from Churchill to have received both honours and the only writer. There are plaques to his memory in Westminster Abbey and in St Paul's Cathedral where he is buried.

Prolific and best-selling writer on religious affairs, a religious programmes producer for the BBC, biographer, journalist, broadcaster, feminist, activist, Moderator of the Movement for the Ordination of Women, communicant member of the Church of England, Monica Furlong lived in Station Road and once edited Spire, the magazine of Holy Trinity Church.

She won a prize for her biography of Thomas Merton, the Trappist Monk, and was a lifelong contributor to such magazines and newspapers as The Times Literary Supplement, The Spectator, The Guardian, The Daily Mail, John O'London's, Church Times and The Tablet. In 1986 she received an honorary doctorate from New York University and in 1995  from Bristol University. She had a passionately critiquing and troubled relationship with her much-loved Church of England and expressed this in her fascinating polemic 'C of E: The State It's In'. She died in 2003 and, in its obituary, The Daily Telegraph described her as 'one of the foremost religious writers of her time.'

Ira Aldridge (1806-1867), the son of a black minister, sailed from New York to England in 1824. Destined for the ministry, he chose to follow his path as an actor and became a very famous one.

His career in England and on the continent spanned forty years. He became famous for his Shakespearean roles and especially for the role of Othello. He appeared at the prestigious Covent Garden  theatre and at the Theatre Royal, Haymarket. He is remembered not only for his brilliant artistic and creative talent as an actor but also for his moral courage in a time of intense agitation over slavery. One of his star roles was in Oroonoko as the noble African prince sold into slavery. Another notable role was as Shylock in The Merchant of Venice. He settled in Hamlet Road, Penge, where there is a blue plaque to his memory.

Ira Aldridge is celebrated in Poland and Russia and figures prominently in most University drama department courses in this country yet he is almost unknown in Penge.